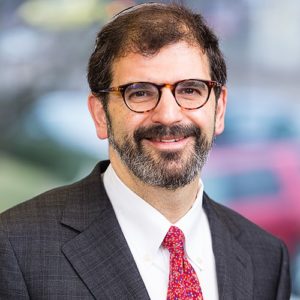 Rabbi Asher Lopatin is the founding director of the Detroit Center for Civil Discourse, a nonprofit designed to bring diverse people together in enriching dialogue, as well as the founding rabbi of Kehillat Etz Chayim, a new, Modern Orthodox synagogue in metropolitan Detroit. Prior to serving in these roles, he was president of Yeshivat Chovevei Torah Rabbinical School in New York and the senior rabbi of Anshe Sholom B’nai Israel Congregation in Chicago. While in Chicago, he and his wife, Rachel, helped found the pluralistic Chicago Jewish Day School and he co-chaired the Jewish Muslim Community Building Initiative of the Jewish Council on Urban Affairs.

In addition to being a nationally sought-after teacher and lecturer, Rabbi Lopatin has written numerous articles and chapters in more than 20 books.

Lauren Herrin joined JCRC/AJC as its assistant director in November 2017, becoming Associate Director in 2021. In this position she oversees the organization’s Government Relations committee, board outreach and online presence, among other duties.

Prior to joining JCRC/AJC, Herrin spent more than a decade at Marx Layne & Company, a Farmington Hills-based public relations, marketing and digital media agency, most recently serving as a senior account executive. There she provided strategic counsel; coordinated press conferences, ribbon cuttings and other events; developed and implemented public relations campaigns of all sizes; and led social media, marketing and advertising initiatives with clients in the nonprofit, hospitality, professional service and legal sectors.

Herrin received her bachelor’s degree in Communications, with a specialization in public relations, from Michigan State University.

Sandy Lippitt has extensive experience in both the for-profit and non-profit sectors, and has expertise in marketing, logistics and event planning and coordination. She began her career as a consumer products buyer with B & E Wholesale, where she worked for more than over five years. She later worked in marketing for such companies as Clairol and Rubbermaid, and as an event coordinator for Merck Pharmaceuticals, setting up medical demonstrations throughout southeast Michigan. She later became the event coordinator for Avon’s Three-Day March for Breast Cancer.

Lippitt’s non-profit experience includes event coordination work with Lungevity and Tamarack Camps, the latter where she chaired the Send-A-Kid to Tamarack annual fundraiser for two years. She began her work with JCRC/AJC as community relations associate in September 2013, later becoming the literacy programs coordinator in 2015.

Hannah Goodman works with JCRC/AJC to further high school, college and young professional programming and involvement in AJC, in partnership with programming at JCRC/AJC.

A Chicago native, Goodman moved to metropolitan Detroit in her youth, later attending James Madison College at Michigan State University where she earned a degree in Social Relations and Policy.  While in college, she held an internship at Capitol Advocacy Services Group, a government relations firm in Lansing and spent a summer interning at Equal Education, an organization in Cape Town, South Africa focused on mobilizing students to advocate for education rights post-Apartheid.

Prior to joining AJC, Goodman served as programming associate on the NEXTGen Detroit team at the Jewish Federation of Metropolitan Detroit.

Ashira Solomon joined JCRC/AJC as Community Associate in January 2021. In this position, she works to build and enhance JCRC/AJC’s initiatives in unity, diversity, equity and inclusion.

Prior to joining the organization, Solomon was co-chair for the first founding Diversity Council at Berkley High School. She served as a peer mediator for the Peers Making Peace program and was a peer leader on high school retreats. Since then, she has worked for, and with, Jewish nonprofits in support and project management roles in order to be instrumental in the organization’s vision and success. Solomon continues to be a point of contact for communities in the areas of social and environmental progress.

Consistent with her focus on the uniqueness of the individual and her commitment to establishing meaningful, professional relationships, Solomon pursues a degree in Family and Human Development at Arizona State University.

Michael Kuper joined JCRC/AJC as its Advocacy Associate in December 2020. In this position, he focuses on promoting the advocacy initiatives designed to advance the policy goals of the organization. In particular, his work includes setting and implementing JCRC/AJC’s policy agenda, developing strategies for policy issues, fostering relationships with local, state and federal legislators in order to build support to advance goals and forming coalitions to, also, support these goals.

A former attorney in private practice, Kuper has worked in a multitude of legal fields including insurance defense, real estate and corporate law.

Joy Alekman joined JCRC/AJC in February 2019 with a background in office administration and management. She most recently served as the office manager for nine years at PathologyOutlines.com and The Detroit College Promise, a nonprofit scholarship organization, which are run from the same office.