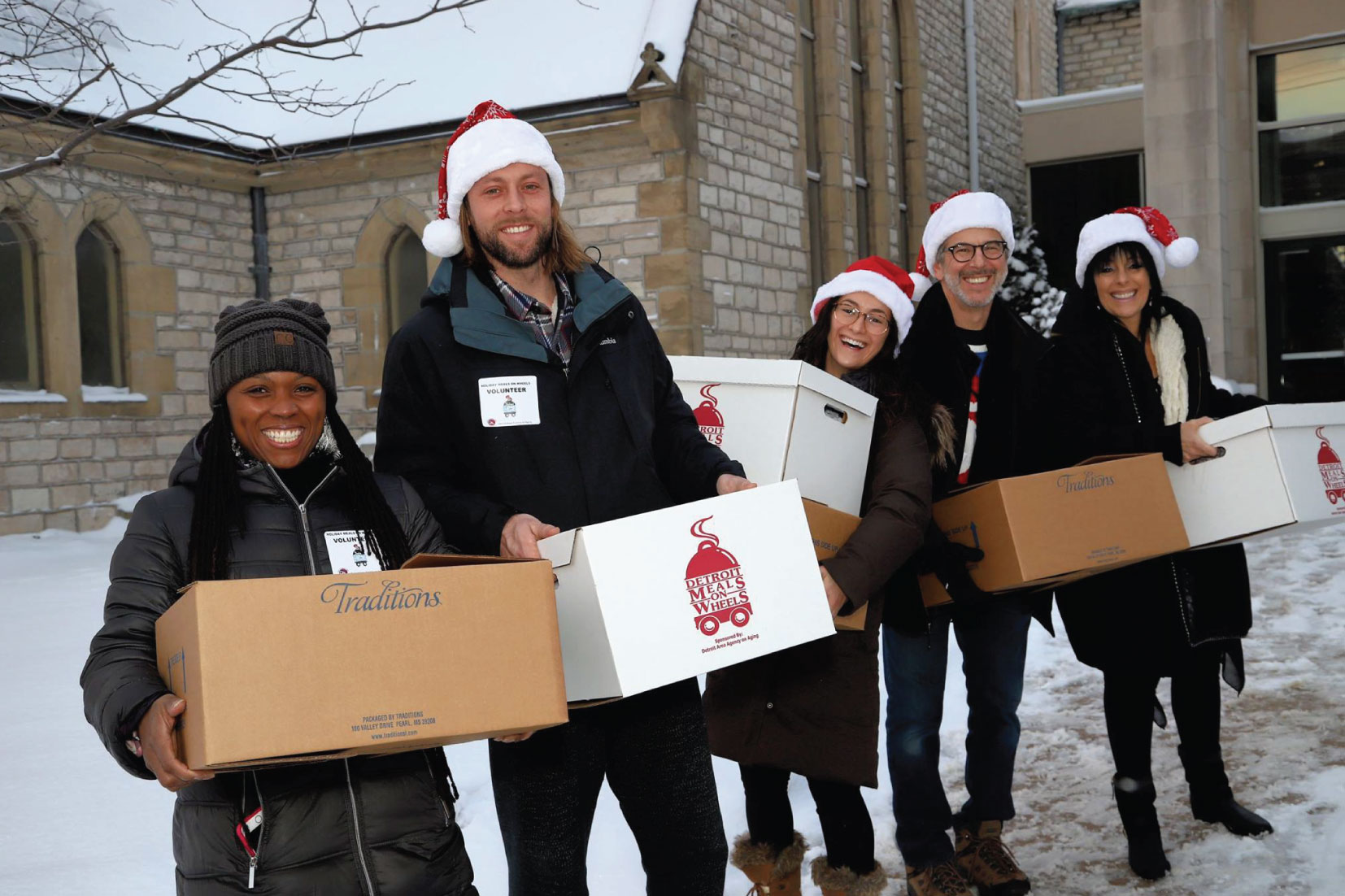 Bloomfield Hills, MI, December 2017 – Detroit’s Jewish community will welcome fellow volunteers from the area’s Muslim community on Monday, December 25 to take part in Mitzvah Day, the annual single largest day of volunteering by Detroit’s Jewish community. Volunteers of all ages will participate in dozens of social service projects throughout metro Detroit so that their Christian neighbors can celebrate Christmas at home with their families.

Please note most volunteer activities that are cleared for media coverage will take place between 6:30 am – 1 pm on Christmas Day. The Piquette Square site in Detroit will run until 3p.m., and Brilliant Detroit in Detroit and Hope Adult Center in Pontiac, will both host volunteers until approximately 4:00 p.m.  A list of sites cleared for media is attached.

Mitzvah Day is presented by the Jewish Community Relations Council/AJC and the Jewish Federation of Metropolitan Detroit. Drawing on the shared value of community service, nearly 1,000 Jewish volunteers will be joined for the eighth year by their Muslim neighbors to take part in “mitzvahs” (good deeds), aiding Detroit area social service agencies at nearly 50 different community sites on Christmas Day. The Michigan Muslim Community Council is coordinating volunteer participation from the local Muslim community for Mitzvah Day.

Volunteer teams will fan out to pre-assigned sites throughout metro Detroit. Project times vary, running between 6:30 a.m. and 4:00 p.m. Many grandparents, parents and children will volunteer together as families. In the spirit of giving back to the community, volunteers will donate a few hours of their time to participate in a variety of activities, including visits to older adults in nursing care facilities, preparing and serving holiday meals, and delivering toys and gifts to families in need.

“We support President Trump’s reaffirmation of Jerusalem as the capital of Israel. Consistent with the bipartisan Jerusalem Embassy Act of 1995, his statement advances Israel’s sovereign right to choose its capital. Jerusalem is home to the Knesset, the Supreme Court, as well as most Israeli government agencies.  Today’s announcement is recognition of the simple truth that Jerusalem is the capital of Israel. It is inexplicable that countries throughout the world have failed to acknowledge this reality.

We endorse direct negotiations between Israel and the Palestinians towards a two-state solution, which is consistent with the United States policy. Bilateral negotiations remain the best route to resolving all final status issues, and we are hopeful that the peace process will be renewed to this end. We are sensitive to the ramifications of this announcement and we hope and pray for peace in Jerusalem.”

The metropolitan Detroit area’s Jewish and Hindu communities joined together for their first celebration of Chanukah and Diwali at the Bharatiya Temple in Troy. Sponsored by the Jewish Community Relations Council/AJC and the Hindu American Foundation, “Finding Common Ground through the Festivals of Light: A Chanukah & Diwali Celebration,” included a night of learning about the unique practices and traditions of the Jewish and Hindu religions. Participants enjoyed latkes and sufganiyot and samosas and traditional Indian sweets, representing the respective holidays, and lit the Chanukah menorah and Diwali diyas, the traditional ritual objects used during these holidays. During the program, JCRC/AJC Executive Director David Kurzmann and HAF Leadership Council member Frank Stella led a discussion about the holidays and also both communities approaches to political advocacy, The conversation was moderated by HAF board member Padma Kuppa. Rabbi Aura Ahuvia of Congregation Shir Tikvah and Nasy Sankagiri of the Bharatiya Temple led participants in song, a highlight of this festive evening.

Bloomfield Hills, MI, March 23, 2017 – The Detroit Jewish community is relieved and grateful that the F.B.I., working with Israeli law enforcement, has secured the arrest of an individual who is allegedly linked to the majority of bomb threats made against Jewish community centers in recent months. The apprehension of the American Israeli suspect, if he is proven to be involved, will go a long way toward calming the nerves of the Jewish community.  Still, many of the large number of recent threats, cemetery desecrations, and other anti-Semitic incidents – which constitute a significant uptick in anti-Semitism in contrast to past years – are unsolved crimes and need the determined work of our police agencies to catch the perpetrators. Dr. Richard Krugel, President of the Jewish Community Relations Council/AJC, said “We thank law enforcement, government leaders, our interfaith partners and the media for their support during these tense weeks and months. We will continue to remain vigilant in our efforts to secure our community institutions and to counter anti-Semitism and other hate crimes against the Jewish community

According to a complaint unsealed this morning in Manhattan federal court, Juan Thompson, 31, of St. Louis, Missouri, is alleged to have made at least eight of the threats against JCCs and other Jewish institutions in January and February as part of a sustained campaign to harass and intimidate a former girlfriend.  Thompson has been charged with one count of cyberstalking, and other charges may be pending.

“We are relieved and gratified that the FBI has made an arrest in these cases. We are grateful to Detroit area, state of Michigan and federal law enforcement for their continuing effort to resolve this matter” said Heidi Budaj, ADL Michigan Regional Director. “The unwavering support from law enforcement and their diligent efforts to solve the remaining cases bring us hope that there may a quick resolution of the remaining open cases.”

These incidents have caused anxiety and concern in the Jewish community in recent weeks.  “Ensuring the safety and welfare of our Jewish community is central to the mission of the Jewish Federation of Metropolitan Detroit, and we are thankful for all of the local and national security and law enforcement personnel that remain committed to keeping our schools and campuses safe,” stated Lawrence A. Wolfe, President, Jewish Federation of Metropolitan Detroit.

“We commend law enforcement for this positive development in the pursuit of justice in the wake of these threats,” added Dr. Richard Krugel, President, Jewish Community Relations Council/AJC.  “Our community has deeply appreciated the many calls we have received from community and government leaders, and our interfaith partners, expressing concern and support in recent weeks.”

The arrested individual was on the radar of ADL’s Center on Extremism, which had followed his past activities, including his deceptive and at times false reports for a news website;  more information about his activities may be found at http://bit.ly/2mmZYpd.  ADL will continuously share its information about the alleged perpetrator via its Twitter account, @ADL_National, and will continue to update information on bomb threats targeting Jewish Institutions at http://bit.ly/2mOCMNY