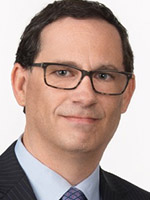 BLOOMFIELD HILLS, Mich. –  The Board of Directors of the Jewish Community Relations Council/AJC (JCRC/AJC) has named Seth D. Gould as president. The announcement was made by Executive Director Rabbi Asher Lopatin.

Gould joined the organization in 2011, when it was AJC Detroit. He continued after the nonprofit partnered with the Jewish Community Relations Council to become JCRC/AJC. Since then he has chaired the Development and Israel Programming Committees, and served as Vice President and First Vice President.

“I am passionate about advocating on behalf of the metropolitan Detroit Jewish community, Israel and threatened minorities, as well as fostering tolerance among interfaith and intergroup communities,” said Seth Gould, who will serve a two-year term. “I am honored to have the opportunity to lead an incredible group of activists who comprise our Board of Directors.”

Gould, a member of the Shalom Hartman Institute’s Detroit Community Leadership Program cohort, is an alumnus of Legacy Heritage’s OnBoard development program for Detroit, which taught best practices for nonprofit board governance.

A partner at the Miller Law Firm, a litigation boutique in Rochester Hills, Mich., the Bloomfield Hills, Mich. resident received his bachelor’s degree in industrial and operations engineering from the University of Michigan and law degree from Wayne State University Law School. He previously served on the board of the Cranbrook Kingswood Alumni Association.